The best Nutella Brownies I had so far! This brownie is fudgy and chewy, filled with chocolate goodness and Nutella buttons (I’ll show you how to make those.) with a crisp, crackly top.

Watch the video to see how easy it is to make Nutella Brownies that will, for sure, win everyone’s heart.

Years ago, I posted a Nutella eggless cake which you guys loved so much. I thought of sharing this awesome chewy Nutella Brownies recipe with you, and I’m sure if you love Nutella, you will fall in love with this brownie.

In one bowl, and few minutes this brownie batter will be ready to be baked. No melting chocolate no need for cocoa powder, all the heavenly chocolaty flavor is coming from Nutella.

No matter what boxed brownies you try, this recipe will beat it! There is no after taste here; in fact, you will go after another brownie in no time.

What you will like about these Nutella Brownies is the fact that you can make them as chewy and gooey as you like, I baked mine for 25 minutes, but 20 minutes are enough to make fudgy and gooey brownies. I like the brownies chewy and not messy with a lot of melted chocolate oozing from the brownie (although this is not a bad thing at all).

After refrigerating these brownies, they maintain their texture and are mind blowing when topped with vanilla ice cream.

How to make Nutella brownies

First, get all the ingredients:

In a bowl, sift the flour, salt, and baking powder and keep aside. In another bowl, add the melted butter, sugar, and Nutella and whisk until combined, then add the eggs one at a time and the vanilla and mix for few seconds. Add the flour and gently mix the ingredients without over mixing it. That’s it; your Nutella Brownies batter is ready!

How to not ruin Brownies

For this recipe, the best baking pan to use is an 8x8 inch square pan.

To be on the safe side, bake the brownies at the top shelf of your oven.

Make sure your oven is preheated. Usually, 10 to 12 minutes of preheating are good unless you have the type of oven that prompt you when it reaches the desired temperature.

Don’t overbeat the eggs or the batter after adding the flour; this will result in a cake like brownies.

Cut the brownies 10 minutes after taking it out of the oven. Cutting it before that time will mess up the brownies, especially if you have baked them for less than 25 minutes.

Other Brownie Recipes You Will Love: 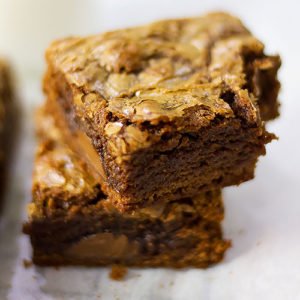 Calories: 184kcal
DID YOU TRY THIS RECIPE?Follow me on Instagram @munatycooking or tag #munatycooking!