If you’ve always wanted the perfect German Chocolate Cake recipe with classic flavors in an easy-to-make way, then this is the recipe you need! You’ll have a delicious chocolate cake with a mild yet deep chocolate flavor and an incredible coconut pecan frosting!

German chocolate cake is an American-favorite chocolate cake that’s actually not from Germany! An English American baker who worked for Baker’s chocolate company invented it using sweetened dark baking chocolate. We’ll use cocoa powder instead for that same flavor but with a deeper feel.

This recipe is perfect for special occasions, the holidays, or if you’re in the mood to have the best chocolate cake of your life! This cake has a sweet and unique chocolate flavor, and the icing is also incredible. Unlike traditional buttercream frosting, this one has a custard-like feel and is made of egg yolks and evaporated milk. You’re going to love it!

All you need are readily available ingredients to make the best chocolate cake!

Egg yolks: We’ll use egg yolks in our delicious coconut pecan frosting as the thickening agent gives that classic custard-like texture and feel to the frosting.

Evaporated milk: You’ll also need some evaporated milk for the frosting since it’s ‘evaporated’ milk to make sure 60% of the water content evaporates for creamier milk, which has a slightly cooked taste for an incredible depth in flavor.

Pecans: The classic combination of the frosting is made one part with pecans because the nutty flavor perfectly balances the richness and sweetness in the cake and frosting.

Coconut: We’ll also use shredded coconut as the other part of the equation for the perfect German chocolate cake frosting!

This is an incredibly easy and rewarding cake, with perfect flavors in every bite.

The full instructions are in the recipe card below, but let's look at the main steps to making this treat.

Beat the lowest speed and add some hot water until the batter comes together. Divide the batter into two lined cake pans and bake for 20-24 minutes in a preheated oven at 350F/180C. Once done, let the cake cool on a wire rack.

Now let’s prepare our frosting! Melt butter in a pan, then add brown and white sugar or white sugar. Mix well and add evaporated milk and egg yolk while whisking. Let the mixture come to a boil to thicken, then remove from heat and add vanilla, toasted pecans, and coconut.

Allow the frosting to cool, then let’s start assembling the cake! Place one cake layer, then spread half the frosting evenly over it. Then place the second layer and add the remaining frosting on top.

Garnish the cake with chocolate chips, toasted pecans, and coconut. It’s best served after being refrigerated for 20 minutes before slicing into it. Your delicious German Chocolate Cake is ready to be served!

This delicious German Chocolate cake is perfect as is, but if you’re looking to customize it a bit, here are some ideas to try:

Decoration variation: I’ve added the frosting in a ‘naked cake’ style, a cake with minimal frosting on the outside to showcase the layers and filling. But you can also cover the cake entirely with frosting by doubling the frosting recipe.

More pecans: You can also add chopped pecans in the middle layer for some added crunch in every bite and a nuttier flavor.

Stronger coconut flavor: For a more robust coconut flavor, consider toasting the coconut for a few minutes before incorporating it into the frosting.

No, even though it’s called ‘German’ chocolate cake, it didn’t originate in Germany but was invented in America.

Why is it called a German Chocolate Cake?

The cake is named after its inventor, a baker named Samuel German, who worked for Baker’s Chocolate Company and created a new type of sweetened dark baking chocolate to make this cake. Later, when a Texas housemaker made this cake and shared the recipe, she named it German chocolate cake, which later became German Chocolate Cake.

Why should I use cocoa powder instead of melted sweetened, dark baking chocolate?

Using cocoa powder, as I’ve explained in the recipe, you’ll end up with the perfect German chocolate cake with the classic flavor but with more depth.

Fridge: You can store leftovers in an airtight container in the fridge for up to 5 days.

Freezer: This cake freezes beautifully, but freeze it without the frosting. The frosting is custard based, and its texture will change if frozen. Place it in an airtight, freezer-safe container and freeze it for up to 3 months.

Thawing: Let the cake thaw in the fridge overnight, warm it in the microwave for 20 seconds, and then serve. 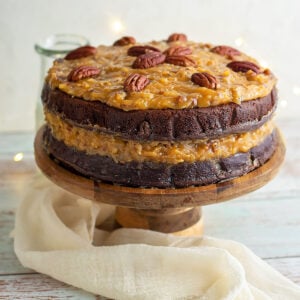 FOR THE CHOCOLATE CAKE BATTER

FOR THE COCONUT PECAN FROSTING

MAKING THE COCONUT AND PECAN FROSTING