We enjoy a good Potato Soup be it Winter or during any other season. Creamy potato soup is a great light dinner that’s low in calories and keeps one full for a longer time. The soup recipe I’m sharing today is easy to make and tastes awesome.

How to make the best potato soup at home?

I like to use russet potatoes, it has more starch and gives the soup a silky smooth texture, but you can use other types of potatoes including red potatoes. You have the option of using either cream for a richer flavor or whole cream milk. We are not going to make a white sauce here, so we won’t add flour. If you like potato soup without milk or cream, try my Lentil Potato Creamy soup

In a pan, add the butter and olive oil, we are mixing olive oil with butter to prevent the butter from burning. Then we will add the onion until translucent and then add the potatoes. It’s important to fry the potatoes to bring out more flavor from it.

Then add water and the rest of the ingredients except the milk or the cream. While the potato is cooking you might need to add more water; it depends on the level of heat you are cooking with and the type of potatoes you have used.

When the potatoes are all cooked, with a potato masher, mash the potatoes leaving some chunks. Then add the cream or the milk and stir for one minute on medium heat.

Other methods of cooking potato soup

There are other methods for finishing this potato soup.

Other Soups You Will Love to Make:

The original recipe was posted in 2010 but is updated with new text and images to make following the recipe easier. 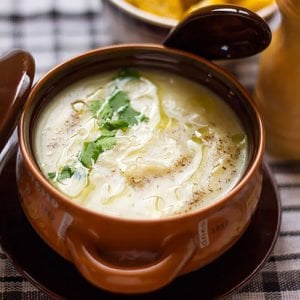