You won’t believe how easy it is to follow this Palak Paneer recipe and how flavorful it stays even after reheating. Serve it with fluffy Parboiled Rice or soft Butter Naan bread. The spices used are what create that distinguished mouth-watering flaour and they are easy to find in stores.

Paneer: It is cottage cheese, but they drain it for longer in India. You can get it in Indian stores. You can also make it at home using my Homemade Paneer Recipe.

Spinach (palak): I have used frozen and already chopped spinach to save time yet maintain the same flavor as the original dish. If you have fresh spinach, then read the tips below.

Green chilies: Some add more chilies in palak paneer than I did; it’s up to you but try not to skip it since, besides a bit of heat, it also adds flavor. To reduce the heat of chilies, read the tips.

Heavy cream: We won’t use much of it in this recipe, but it is essential.

Ghee: Ghee is clarified butter and adds a beautiful richness to the curry. You can buy it in-store or try my recipe for making ghee here.

Add ghee to a pan and when hot, add the paneer and fry both sides till it’s crisp and has a golden exterior.

Step 2
Fry the onion until translucent. Then add garlic, ginger, and green chilis and cook these for a minute on medium heat. Now add chopped tomatoes to the pan and cook for a few minutes.

Add all the spices and mix for a few seconds.

Step 4
Squeeze out all the liquid from the spinach. Add it to the tomato and onion mixture. Cook on medium heat for three to four minutes.

Keep three tablespoons of the mixture in the pan, and scoop the rest into a blender. Add half a cup of water to the blender and blend until smooth.

Fenugreek adds this amazing aroma to the dish, so add the dry fenugreek leaves and cook the mixture for three minutes.

Pour cream into the mixture, and mix until it’s combined.

Step 9
Add the golden pan-fried paneer from step one into the curry and cook for another two minutes.

The gravy is delicious; hence, you can make variations of it and make it your own.

Make it vegan: Instead of paneer, use tofu cubes and coconut cream instead of heavy cream. Any cooking oil of your choice can replace the ghee.

Use potatoes instead of paneer: Cut the boiled and peeled potatoes into large cubes. Shallow fry them until they turn golden, and then use them in the recipe.

What is Palak Paneer?

What is the difference between Saag Paneer and Palak Paneer?

The difference between the two is simple: palak paneer recipe is an actual Indian dish that originated in North India and only has spinach, while saag paneer originated outside India by foreign chefs and at times they add fresh fenugreek in it.

Is this dish healthy?

It is a healthy dish if consumed in moderation. You can make it healthier by reducing ghee and skipping heavy cream.

What type of spinach should I use?

Fresh large spinach leaves can be a little bitter with less flavor. Go for smaller leaves or frozen spinach.

If you liked my palak paneer, then you should try other amazing vegetarian dishes I have on my blog.

Fridge: Store the leftover in an airtight container and refrigerate it for up to 3 days.

Freezer: Follow the same steps above and place it in the freezer for up to 2 months. The paneer might turn mushy since dairy does not freeze well.

Reheating: Reheat it on the stovetop in a pan or microwave it. If frozen, place it in the fridge to thaw for safety. 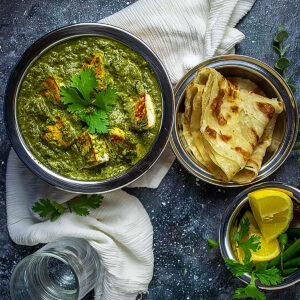