This Cinnamon Rolls Recipe tastes like everyone's favorite store bought one but it is fluffier, lighter, and tastes even better. The moment you are done kneading the dough, its smooth texture and tempting aroma will get you eager to bake it. You can make the cinnamon rolls ahead of time, and I will explain how in this post.

If you enjoy cinnamon rolls and drop by your favorite spot to buy some often, please skip that and make this recipe instead.

There is nothing better than freshly made cinnamon rolls, it has your hard work, and ingredients familiar to you. The filling can be adjusted to your liking, if you want more, add more.
You will be surprised how mind-blowing these rolls taste and will feel proud to serve them to your family and friends. The dough is not messy and baking time is only 17 minutes if you are baking large cinnamon rolls.

How to Make Cinnamon Rolls Dough?

What yeast to use in making cinnamon rolls?

Can I Omit the Egg From the Cinnamon Rolls Recipe?

Not from this recipe BUT I do have another cinnamon roll recipe that has no egg and is low in calorie too. Although it's a low-calorie recipe, it tastes great, and it's one of my all-time hit and popular post on Pinterest too.

Can I Make the Cinnamon Rolls in Advance?

How to Fill the Rolled-out Dough With Cinnamon and Butter Filling?

The icing is simple and is made from three ingredients, milk, vanilla, and confectioner’s sugar. I prefer this icing over the cream cheese icing although I enjoy both, this simple icing goes well with these fluffy and light cinnamon rolls. I sometimes pour caramel sauce on top of the icing and add some chopped and toasted walnuts. I pour the icing on the cinnamon rolls while warm which allow the icing to seep a little in the rolls and make it extra yummy!

Sticky cinnamon rolls -  A delicious breakfast that your family will look forward to. 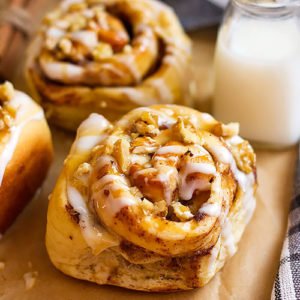 TO MAKE THE DOUGH

TO MAKE THE FILLING

TO MAKE THE ICING

TO MAKE THE CINNAMON ROLLS

Calories: 295kcal
DID YOU TRY THIS RECIPE?Follow me on Instagram @munatycooking or tag #munatycooking!

This post was originally posted in 2012 and is updated with new images and text.