Sticky Cinnamon Rolls – Let’s talk fancy breakfast, a delicious breakfast that your family will look forward to, and an amazing way to start your morning. These fluffy, light, sticky cinnamon buns are made to please, and I’m sure that you will bake these rolls often!

Nothing more satisfying than making homemade cinnamon rolls, and if you add toasted pecans and a caramel layer, it turns into a mouth-watering dessert/breakfast. If you are allergic to eggs or want to make a low-calorie cinnamon roll then I have a recipe for you, it’s one of my popular recipes and is fail proof.

How to make sticky cinnamon rolls?

The dough is forgiving, it might look sticky in the beginning, but soon, you’ll love kneading it. The texture turns smooth, and then you get to smell the butter mixed with vanilla.

To make the dough, you’ll need simple ingredients like flour, egg, milk, yeast, sugar, a pinch of salt, and water. You don’t need a stand mixer to knead the dough; I’m sure you’ll enjoy the transformation of this dough and how it feels in your hands. Cover and let it rise.

For the filling, cinnamon, and sugar, yes, that’s all. To make the caramel, you’ll add butter to a saucepan and then add brown sugar, stir both ingredients while on medium heat for 4 minutes. Pour the caramel in the baking pan. Add the toasted pecans.

Can we prepare the dough a day before?

Yes! I knead the dough before going to bed, place it in a plastic container, covered tightly, and leave it in the fridge overnight. In the morning, I take out the dough from the fridge, place it on the counter to come to room temperature. Roll it out, fill it, roll it up and bake it as per the recipe below.

The size! Sticky cinnamon usually rolls smaller in size than cinnamon buns, but it is the same recipe. If you follow my recipe, you can either make fourteen mini cinnamon rolls or seven medium to large size cinnamon buns.

I made smaller size rolls to control how much my Husband and I eat, and I’d like to report that this method failed big time. We ended up eating more because the size was small, and the rolls almost melted in our mouth, so we grab the next roll quickly.

Of course, you can! My light cinnamon rolls recipe can be used here too. Use the dough but keep the filling and the topping the same as the recipe here. 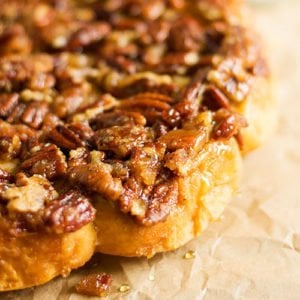 *Milk to brush the rolls before baking them.

TO MAKE THE DOUGH

Calories: 250kcal
DID YOU TRY THIS RECIPE?Follow me on Instagram @munatycooking or tag #munatycooking!
« Pumpkin Flan
Swedish Meatballs Recipe A Low Calorie Version »