Custardy and sweet, this Apple Bread Pudding is more like a glorified dessert than a bread pudding. Follow along with my recipe and use caramelized apples to make it an even more impressive treat.

I have been making Apple Bread Pudding for years and have tried quite a few recipes along the way. It couldn't be easier than this one. Plus, it’s incredibly versatile and you’ll be experimenting with it and adding your own flair to it in no time!

Whether you need a simple, crowd-pleasing dessert or a warming treat after a long day, this dessert will hit the spot.

What is Bread Pudding?

Bread Pudding is a delicious dessert casserole that has humble beginnings. Created as a way to utilize bread that has gone stale, women came up with the perfect dessert that’s perfect for all seasons and all occasions!

Essentially bread pudding is made with day-old bread. It is usually cut into cubes and soaked in an egg custard mixture. Many people add different types of fruit and nuts to it, and we’ll be making a delicious, caramelized apple version! It’s my absolute favorite.

Many people believe that it first originated in England around the 12th Century and became popular there in the 13th Century. By then every kitchen had what they called a ‘pudding basin’ that collected stale bread to be used to this pudding.

From there it landed in the United States, and the rest is history! We’ve been adding new variations to it since. This apple version is going to become your new favorite, the caramelized apples seriously add richness to it!

What Kind of Bread Should I Use?

For this recipe, I’ve used regular white sandwich bread. It’s a great way to use those last few pieces of bread that tend to dry up and get thrown in the trash.

I’ve taken inspiration from the ‘pudding basin’ people in England used to have and have my own little freezer bag version! I save up some bread to use it in my weekly Apple Bread Pudding – it’s seriously so good during breakfast, brunch, or as an after-dinner dessert!

If you don’t have stale bread lying around, you can keep yours out overnight or for a few hours.

White sandwich bread is also not the only type of bread you can use. Brioche, challah bread, French bread also work really well!

What Kind of Apples Go Well in it?

Any kind of apple works well in this recipe. I’ve used Gala apples in mine, but you can also use Granny Smith apples, Fuji, or Honey Crisp if you have those available or prefer their flavor more. Told you this recipe is super versatile!

Gala apples tend to hold up well while baking and have a beautiful, sweet flavor that turns even better when you caramelize them.

What You Need to Make an Apple Bread Pudding at Home

This recipe requires super simple ingredients, that you probably already have in your pantry and fridge! Here’s what you’ll need:

Apples: I have chopped the apples in this recipe, but you can slice it thin or make the cubes bigger. As mentioned above, I’ve gone for Gala apples because I prefer their taste, but you can use any variety you have on hand.

Bread: For this recipe, I’ve used regular white sandwich bread but you can also go for brioche, challah bread, or French bread.

Milk: This makes the base for the egg mixture that will turn into a delicious custardy pudding once it’s baked.

Eggs: I’ve used whole large eggs, but you can use one whole egg and two egg whites for a lighter, delicious texture.

Sugar: This recipe requires regular granulated sugar, but you can also use brown sugar.

Spices: A little cinnamon and nutmeg are all you need to add that extra something to this already scrumptious dessert.

How to Make Apple Bread Pudding

Creamy, rich, and sweet, it's pure comfort food. This recipe for apple bread pudding is remarkably quick to make. See just how easy it is here:

What is Bread Pudding's Texture Supposed to be Like?

Bread pudding is supposed to be creamy, soft, and with a nice crisp, golden top. It’s definitely not supposed to be soggy or mushy when baked correctly. Follow my recipe and you’ll achieve the perfect texture!

How Do I Tell When My Bread Pudding is Done?

Just like baking a cake, you can use a cake tester or toothpick and it should come out clean when it’s done. The top of the bread pudding should be slightly crisp with a golden brown color, while the inside should be firm and not runny.

Make sure to put your cake tester or toothpick right in the middle to make sure it’s completely done. 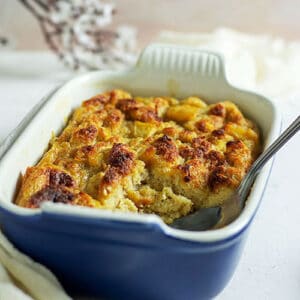 FOR THE BREAD PUDDING

FOR THE CARAMELIZED APPLES