Umm Ali is a classic Egyptian bread pudding that's creamy, comforting, and filled with nuts such as pistachios, almonds, and pecans, along with raisins and shredded coconut for a wholesome, delicious combination you're bound to fall in love with!

While it might not be as well known in the US, Umm Ali (or Om Ali) is a classic that Egyptians and people from other parts of the Middle East love, and for a good reason! It combines the taste and feel of a bread pudding with nuts and raisins that elevate it to the next level!

What's best is that this is an incredibly simple and easy recipe that looks fancy and tastes delicious. It's perfect for serving holidays and dinner parties, but also when you want to make something easy yet tasty for the family. Try this recipe today; I'm sure you won't be disappointed.

You need simple ingredients to make this delicious Umm Ali dessert at home. Let's take a look at what these are.

Puff pastry: We'll use puff pastry as the base of this delicious Egyptian bread pudding! It'll soak up the sauce and get the perfect texture as it bakes in the oven.

Nuts: To add an Egyptian feel and texture, we'll add a mix of different nuts that will add a crunch to each bite and make the pudding taste even better. We'll use pistachios, almonds, and pecans in this recipe.

Raisin: We'll also add some raisins to elevate the flavor to the next level and give it that authentic feel.

Milk: Of course, we'll also need some milk for Umm Ali since it is a Middle Eastern bread pudding. We'll be using whole milk and evaporated milk for our recipe.

Making Umm Ali is straightforward and greatly rewarding. You'll end up with the most comforting pudding.

The full instructions are in the recipe card below, but let's look at the main steps to making this treat.

Start by preheating the oven to 350F/180C. Once preheated, bake the puff pastry as per the instructions on the packaging. It should take around 15 minutes to turn golden.

In a mixing bowl, break the cooled puff pastry. Then add the nuts, shredded coconuts, raisins, and cinnamon powder. Mix well with your hands. Transfer the previous mixture to a 9”x8” deep casserole.

Add the whole milk and the evaporated milk in a saucepan with the sugar and vanilla. Mix well. Let the milk boil, turn off the heat, and gradually pour it over the puff pastry and nuts mixture.

Next, turn on the broiler and place it in the oven until it gets brown patches on the surface. Once done, remove it from the oven and garnish it with chopped pistachios.

Your delicious Umm Ali is ready to be served. Serve it warm.

Other nuts: You can add nuts to this delicious dessert since it's incredibly versatile. Hazelnuts will work well here as well.

Puff pastry substitute: Traditionally, puff pastry is used to make Umm Ali, but you can also get creative and use other variations, such as palmiers or croissants, to make your delicious Egyptian bread pudding.

What is Umm Ali?

Umm Ali is a traditional Middle Eastern dessert that originated in Egypt. It is a bread pudding with puff pastry, nuts, raisins, and milk.

Can I make Umm Ali without puff pastry?

Yes, you can make Umm Ali without puff pastry. You can use other variations, such as palmiers or croissants, to make your delicious Egyptian bread pudding.

Why is it called Umm Ali?

The name 'Umm Ali' translates to 'Ali’s mother,' It is believed to have been created by the wife of an Egyptian sultan in the 13th century, who then distributed it throughout the city for people to have as a celebration.

Fridge: Umm Ali can be stored in the fridge for up to 3 days in an airtight container.

Freezer: You can freeze Umm Ali for 2 to 3 months by placing it in a freezer-safe container and popping it into the freezer.

Reheat: To reheat, place it in a preheated oven at 350F/180C for 10 minutes or until heated through. 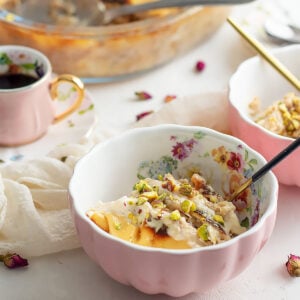 FOR THE MILK SAUCE

TO DUST THE TOPPING