Rasmalai is an Indian dessert made of cheese balls. Paneer is an Indian cheese that looks and tastes like cottage cheese except it is a little drier. Paneer is used in making dessert and savory dishes like Palak Paneer.

Rasmalai is a Bengali dessert made of cheese balls smothered in silky and delicious milk sauce. The word “Ras” means juice and the word “malai” means cream. This dessert is served in festivals and special occasions, but in my house, it is made whenever craved for.

How to make Rasmalai?

To make Rasmalai you must prepare the cheese (paneer), a simple syrup, and milk sauce.

Making the milk sauce usually takes a long time, and that is by cooking the milk until it reduces, but in this recipe, we won’t spend that much time preparing it, instead I have used cornflour to thicken the sauce, and the result is an amazing milk sauce in just a few minutes.

How to prevent Rasmalai from breaking?

Making the cheese is easy, but the tricky part is when adding the cheese balls in the syrup to cook. To prevent the balls from breaking, the paneer (cheese) shouldn’t be too dry, if you feel that the cheese is to crumbly add a teaspoon of water and knead.

When forming the balls, make sure there are no cracks in the balls. Add the balls to the syrup when the syrup is boiling and avoid flipping the cheese a lot while it's cooking.

Another Indian Dessert you will love: 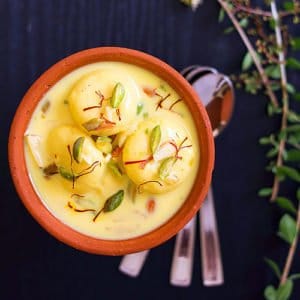 TO MAKE THE PANEER (cheese)

TO MAKE THE RASMALAI BALLS

TO MAKE THE SIMPLE SYRUP

When making the paneer make sure not to let it go too dry. Dry paneer or cheese later won’t puff properly when added to the syrup and will result in hard balls instead of spongy balls. I have doubled the recipe in the video.

Calories: 250kcal
DID YOU TRY THIS RECIPE?Follow me on Instagram @munatycooking or tag #munatycooking!
« Flan Crème Caramel with Saffron and Cardamom
Luqaimat Recipe with Custard »