This Pumpkin Flan recipe has a story which I’m going to share with you today! The first time I tasted pumpkin was when I made this flan! I was so excited to use pumpkin in my cooking; I made a homemade pumpkin puree. I have also for the first time made a pumpkin pie spice mix for this flan recipe.

You see, where I am from (UAE) we don’t use pumpkin in cooking. But after cooking many foreign recipes and trying new ingredients, I was intrigued by pumpkin and decided to give it a try. I wanted my introduction to pumpkin to be sweet, so I picked a dessert recipe, a pumpkin flan recipe!

Flan is a dessert, it’s creamy in texture and has two layers. A caramel layer and a custard layer. You can bake the flan in the oven or cook it in a water bath on the stove top. The basic ingredients in a flan recipe are eggs, milk, and sugar. The flan or sometimes is called Crème Caramel, is usually baked in a small or medium size ramekin and when is set, and is time to serve, the serving plate is placed face down on the ramekin, and then the ramekin is flipped upside down for the flan to fall face down on the serving plate.

How to make pumpkin flan?

To make flan, you will need oven safe ramekins. You will also need eggs, milk, sugar, vanilla, pumpkin puree, and pumpkin pie spice mix. Either blend all the ingredients in a blender except milk, or you can whisk using a hand whisk instead.

First, you have to prepare the caramel layer, so add sugar into a saucepan and cook until light amber in color, pour water and whisk, then pour in the ramekins and keep aside to cool.

Heat the milk and when it boils, remove from heat immediately. Using a ladle, add the milk gradually to the egg mixture while whisking the egg mixture to temper it, keep doing so until you have used all the milk.

Strain the mixture using a fine sieve strainer. Pour the custard in the ramekins after the caramel layer is cool and firm. Cover the ramekins with aluminum foil, place the ramekins in a large baking pan, pour boiling water into the baking pan. The water should cover half the ramekins and bake for almost an hour.

The pumpkin flan is ready if you inserted a toothpick in the middle and came out clean. Let the flan cool to room temperature and then place it in the fridge for at least four hours before serving.

This recipe was originally posted in November 2014, images and text are updated! 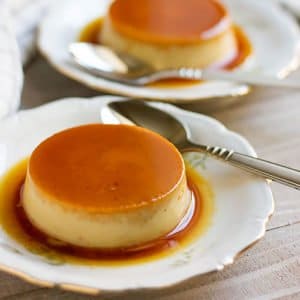 To make the caramel

To make the flan