This Hash Browns recipe will give you perfectly crisp hash browns that are golden brown on the outside and tender and delicious on the inside. They make for the perfect side dish whether it's for breakfast or brunch, and not to forget that they're true crowd pleasers!

Hash browns are the quintessential breakfast treat that everybody seems to love! And there isn't anything better than perfectly crisp hash browns with that classic flavor you get at diners.

For the crispiest and most perfect hash browns, the trick is to get as much moisture out as possible before cooking them in a skillet. This will help get the right texture without them getting too mushy. Trust me, this recipe explains all of that with easy-to-understand instructions!

All you need are some simple pantry staple ingredients to make this classic potato recipe.

Potatoes: First of all, we need some potatoes to make these hash browns! I've used Yukon Golds, but you can use whichever one you like best. Read the FAQs below to learn more.

Spices: You can truly experiment and add whichever spices you love best, but for that classic flavor, we'll be adding black pepper, dried oregano, and onion powder.

Making these delicious hash browns is incredibly easy! This recipe is easy enough for even beginners to try to make a classic breakfast side dish. Let's look at the step-by-step process to make them at home.

The full instructions are in the recipe card below, but let's look at the main steps to making this delicious potato recipe.

Use a box grater to shred potatoes and then wash them with cold water three times and drain. Use a cheesecloth or paper towel to get rid of as much moisture as possible before cooking them.

We'll cook hash browns two times to make them nice and crispy. To start, heat oil in a hot pan and add shredded potatoes. Stir on medium heat to prevent the potatoes from sticking to the pan.

Take the shredded potatoes off the heat and mix cornstarch into them. Then add and mix the spices until its well combined. Place the hashbrown mixture between two pieces of parchment paper, and then use a rolling pin or your hands to spread the mixture to your desired level of thickness.

Remove the parchment paper on the top to cut out your hash brown mixture to whatever shape and size you prefer. Then heat enough cooking oil in a frying pan to deep fry the hash brown. Make sure not to crowd the pan so you can flip them easily.

Fry the hash browns until they turn golden brown or darker if you want them crispier. Once done, remove them from the oil, place them on a wire rack to cool, and let the excess oil drip off. It will also allow them to cool properly and not turn soggy.

These hash browns are absolutely perfect and classic, but if you're looking to customize the flavor, here are a few ideas you can try:

Cheese: If you don't like parmesan cheese, you can substitute it for cheddar cheese or any other cheese you like.

Herbs: To change the overall flavor, you can even experiment by adding some fresh or dried herbs to your potato mixture before cooking them. It might not be the traditional way of doing it, but trust me it'll taste great!

What are hash browns?

Hash browns are a classic breakfast dish made from shredded potatoes that have been cooked in a skillet until they are golden and crispy. They can be served as a side dish or as the main course, and they are often topped with cheese, bacon, eggs, and other ingredients. Hash browns can also be found in many restaurants, fast-food establishments, and diners.

What are the best potatoes for hash browns?

I've used Yukon Gold potatoes while making this recipe, but you can go for whichever ones you have on hand, and you'll still end up with delicious hash browns. But technically, starchy potatoes like russet potatoes are the best ones since they are higher in starch content which helps crisp them up better. The only issue is that they may fall apart easily, and that's where waxy potatoes like Yukon Gold or red potatoes shine.

How do you get crispy hash browns?

The trick to getting crispy hash browns is to, first of all, make sure you remove as much moisture from the shredded potatoes as possible by using a cheesecloth or paper towel. The other trick is to cook the potato mixture twice. This makes it crisp up well as the potatoes won't absorb too much oil. Follow my recipe to know exactly how to use this secret method.

Fridge: You can store any leftovers you may have in an airtight container in the fridge for up to 5 days.

Freezer: These hash browns freeze really well. And so you also have the option of freezing them in a freezer-safe container for up to 2 months.

Reheat: When it's time to have your hash browns, let them thaw in the fridge overnight, then warm them and re-crisp them in a nonstick pan over medium heat for 5 minutes or until they're nice and crispy. 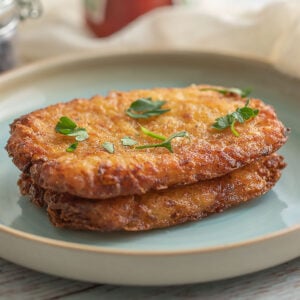 This Hash Browns recipe will give you perfectly crisp hash browns that are golden brown on the outside, and tender and delicious on the inside.
No ratings yet
Print Rate
Course: Breakfast
Cuisine: American
Keyword: Hash brown
Prep Time: 15 minutes
Cook Time: 20 minutes
Total Time: 35 minutes
Servings: 4 People
Calories: 260kcal
Author: Muna Kenny

TO FRY THE HASH BROWN

This Hash Browns recipe will give you perfectly crisp hash browns that are golden brown on the outside, and tender and delicious on the inside.