These Loukoumades are the perfect Greek donuts that are served with honey and chopped nuts!

They’re made of a simple dough batter and then fried until they’re golden and crispy on the outside, and soft and fluffy on the inside!

Loukoumades are one of the most special Greek dishes out there, in fact, they were served to the winners of the first Olympic games in 776 BC. That’s just how special they truly are!

But don’t worry, they’re so incredibly simple to make that you’ll have to fight the urge to make them every single day! Perfect to have as a snack or even as a dessert for your friends and family.

Trust me, once you try this authentic Loukoumades recipe you’ll want to make it again and again!

Loukoumades are the Greek version of donuts, or more like donut holes. They are small, fluffy, sweet honey balls that are deep-fried until they are golden and crispy.

These Greek donuts are usually served dipped in homemade honey syrup, sprinkled with cinnamon, and topped with some chopped nuts, typically chopped pistachios or walnuts, and sometimes even some toasted sesame seeds.

They go really well with coffee or tea. I can promise you that you won't be able to stop at just one or two, no matter how hard you try.

Loukoumades have the most delicious texture. They’re crunchy on the outside and perfectly soft and fluffy on the inside.

What’s best is that they’re also super easy to make and taste incredible every single time!

My recipe for Loukoumades will teach you the authentic way to make these delicious Greek treats to perfection. You only need some basic pantry-staple ingredients to whip these up. Trust me, once you try this recipe you’re seriously going to fall in love with it!

Where Did Loukoumades Originate From?

Loukoumades are truly one of the most special Greek dishes out there! The origins of Loukoumades can be traced back to ancient Greece!

As early as 776 BC, these delicious Greek donuts were given as ‘honey tokens’ to winners of the first Olympic Games. Yes, that’s how perfectly incredibly and special these fried donut balls are!

The Greek-Sicilian poet Archestratus, who lived in the 6th century BC, was the first person to write about a sweet that was similar to Loukoumades. He called them ‘Enkrides’ and they were deep-fried donuts that were soaked in honey syrup.

What Other Recipes are Similar to Loukoumades?

In Mediterranean and Asian cuisines, a variety of deep-fried pastry balls seasoned with honey and spices are popular. They're very similar to Loukoumades, and in most cases, their origin can be traced back to these delicious Greek doughnuts.

One of the closest dishes to Loukoumades is Luqaimat, which is incredibly popular throughout the Middle East. It’s a kind of Arabic sweet dumpling that could be described as donuts made with yeast and then fried until they’re golden brown in color and then dipped in date syrup, rolled in honey, or dusted with sugar.

In Italy, the Neapolitan Struffoli are the closest things to Loukoumades. These are little deep-fried balls that are topped with honey syrup and candies. They are often served at carnivals and Christmas parties.

The Lokma can also be made without any syrup. This is called Boortsog, and it is typical of Mongolian food.

Gulab Jamun is another recipe that appears to have originated from Lokma and Loukoumades. During their invasions of India in the 1200s, it is said that the Turks may have brought this dessert with them.

It is made using thickened milk and is then steeped in simple syrup sometimes with rose water. These treats have swiftly spread over the Indian Subcontinent and are one of the most popular desserts served there on special occasions.

Since Indians have migrated to Southern and Eastern Africa and the Caribbean, they have also become quite popular there.

What is the Difference Between Loukoumades and Luqaimat?

Loukoumades and Luqaimat are incredibly similar. In fact, the origin of Luqaimat is said to directly come from Loukoumades.

Both the recipes and the method of frying are near identical, except that Loukoumades is a lot simpler in terms of ingredients.

Luqaimat uses specific spices that are Middle Eastern in nature, such as cardamom powder and saffron that are not used while making Loukoumades. Loukoumades also contain milk, while Luqaimat does not.

The syrup and garnishes that go on top of these two donut holes also differ. Luqaimat is typically served with date syrup or honey, while Loukoumades is usually served with honey, ground cinnamon, and topped with chopped nuts such as walnuts and pistachios.

Regardless of which dish you prefer more, they both are incredibly similar and delicious!

What You Need to Make Loukoumades at Home

Making Loukoumades at home is so simple that you’ll have to resist the urge to make it every single day! Here’s what you need to make them at home:

Water: We’ll be using some lukewarm water to activate the yeast and to get the right consistency for the Loukoumades dough.

Milk: You’ll also need some milk to give your Loukoumades the perfect flavor and softness.

Yeast: We’ll be using active dry yeast for this recipe to leaven the Loukoumades dough.

Oil: You’ll need oil to fry these Greek donuts and also to scoop the batter into the frying pan.

Salt: We’ll be using a little salt to bring out all the flavors and to also balance them.

Honey: These delicious Greek donuts are referred to as ‘honey tokens’ for a reason! We’ll use some delicious honey to drizzle it on top before they are served. If you can see if it’s possible to get your hands on some Greek honey for these delicious donut holes!

Ground cinnamon: Cinnamon powder adds the perfect flavor to the Loukoumades and really brings out the flavor. Sprinkle some on top before serving.

Pistachios: Loukoumades are typically served with some chopped nuts, and we’ll be using pistachios for this recipe. You can also go for some chopped walnuts instead if you prefer them more.

How to Make Loukoumades Step by Step

Start by taking a large bowl, and adding water, milk, sugar, and yeast to it. Mix it all well. Next, add the oil and mix for a few more seconds.

Now add the flour and salt and then stir the ingredients until they’re well combined with a whisk and no lumps are visible in the dough.

Cover the bowl with some plastic wrap and let the dough rest in a warm place for an hour or until it doubles in size.

Once it has doubled in size, uncover the dough and mix it using a fork for a few seconds.

Next, heat enough oil to fry the Loukoumades in a medium frying pan.

Time to fry these delicious donuts! Here’s how you need to scoop these into the pan. Place a small bowl with oil on the kitchen counter close to the batter. Dip a tablespoon in cool oil and remove excess oil.

Dip your hand in the batter, using your palm, and grab a small amount from it.  Squeeze out a small portion of the batter between your thumb and index finger, like you are making a fist. Scoop out the batter using the greased spoon and drop it gently in the hot oil to deep fry them. Repeat this step several times but do not crowd the pan.

While the Loukoumades are frying, use a slotted spoon to push them into the oil and turn them on all sides, until they’re dark golden color from all the sides. When done place them in a strainer, paper towel, or kitchen towel to drain the excess oil from them.

Now time to garnish them! Place them on a large platter and sprinkle some ground cinnamon over the Loukoumades and flip them to distribute it evenly. Pour a tablespoon of honey over them and flip them again as shown in the video.

Before serving the Loukoumades, pour some more honey and sprinkle with crushed pistachios.

How to Serve Loukoumades

Loukoumades are best served immediately after making them. Serve them on a large platter and then drizzle some honey on top and sprinkle some cinnamon powder on them with chopped pistachios!

Alternatively, you can also use chopped walnuts or toasted sesame seeds. Some contemporary versions of it are even served with some chocolate sauce, caramel syrup, or even maple syrup. So, try different servings and make this recipe your own!

Luqaimat: Want to try the Middle Eastern version of Loukoumades? Then try this delicious Luqaimat recipe! They’re incredibly similar to Loukoumades but also include a beautiful combination of Middle Eastern spices to give it the perfect touch. If you enjoy Loukoumades, then you’ll definitely love these too!

Gyros: Looking for another Greek recipe? Why not try the incredibly popular Gyros! This recipe is the perfect one for Gyros featuring delicious, juicy gyros meat that has an authentic flavor and will make you feel like you’re having it on the streets of Greece! Highly recommend you give it a shot!

Shawarma: Want to try the Middle Eastern version of Gyros? Then Shawarma is what you’re looking for! It’s a super popular side dish in the Middle East that has perfectly marinated chicken that’s cooked to perfection and then wrapped in the perfect pitas! 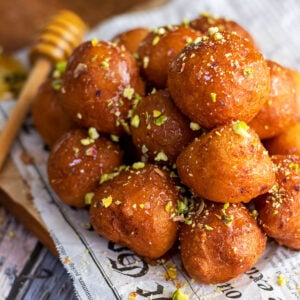 Loukoumades are Greek donuts that are golden and crispy on the outside, and soft and fluffy on the inside. Here's the tastiest and easiest recipe out there!
No ratings yet
Print Rate
Course: Dessert
Cuisine: Greek,
Keyword: Loukoumades
Prep Time: 15 minutes
Cook Time: 15 minutes
Dough resting time: 1 hour
Total Time: 1 hour 30 minutes
Servings: 3 people
Calories: 70kcal
Author: Muna Kenny

To fry the loukoumades