Keema Paratha is a delicious unleavened Indian flatbread that’s stuffed with a flavorful minced meat mixture. It’s incredible on its own or with some yogurt-based chutney.

Making it is incredibly easy, and it’s also healthy since we’ll be using whole wheat flour to make the dough (at home!). This recipe is foolproof and gives an incredibly stuffed flatbread every single time.

If you’re curious to know what Keema Paratha is all about and how to make it at home, keep reading!

What is Keema Paratha?

So Keema Paratha is the best of both worlds – deliciously flavorful minced meat mixture stuffed in whole wheat flour dough which is then cooked to perfection!

It’s an extremely popular dish in India and Pakistan (as well as other South Asian countries such as Bangladesh!). Many people like eating it for breakfast in these countries, where people love having a wholesome meal before starting the day.

I’m going to not only teach you how to get perfectly soft dough for paratha every time in this recipe but also how to make the keema and stuff it. My keema recipe does not include tomatoes, as they’re traditionally not used in a classic keema recipe.

This dish is filling and complete on its own, but you can also serve it with some vegetable curry. Trust me, this stuffed Indian bread is about to become your new favorite!

What You Need to Make Keema Paratha at Home

Making this recipe at home is incredibly easy. I’ve divided the ingredients into two parts: The dough and the keema. So, let’s see what they are:

To Make the Dough:

Water: This is the liquid we’ll need to make it into a dough.

Salt: You don’t need a lot of salt, just a little to taste to bring out all the flavors.

To Make the Keema:

Ground beef: I’ve opted for beef in this recipe, and I recommend an 85% lean mix.  Mutton keema is also super popular. It is basically minced mutton instead of beef. You can also use minced chicken or turkey if you’re looking for a leaner option.

Onions: This is the base of the keema (apart from the minced meat itself). We’ll be using 2 medium-sized onions that are finely chopped.

Garlic: Garlic is the perfect aromatic for any meat dish in my opinion! It greatly enhances the flavor of keema. We’ll be needed 5 finely minced cloves. Many people also prefer to use ginger-garlic paste instead.

Spices: This is where all the magic happens! We’ll be needing coriander powder, ground cumin, curry powder, black pepper, and garam masala for this recipe. Trust me, these spices are worth the little investment because you can make so many other dishes with them!

Coriander: Finely chopped fresh coriander (cilantro) is what adds that extra layer of flavor to the keema.

Water: Water will allow us to cook the keema well without burning it. Read the instructions to know when to add it.

Oil: We’ll need a little bit of oil to cook the keema, and then a little more to make the keema parathas.

How to Make Keema Paratha – Step by Step

Making Keema Parathas at home is easier than you think! We’ll first start by making the dough, then making the keema, and then finally stuffing it to make the keema paratha. Let’s begin!

Take a large bowl and mix the whole wheat flour and salt in it.

Next, add water gradually and knead it for approximately 5 minutes or until you get a soft dough that is not sticking to your hands.

Cover the dough and let it rest for 20 minutes.

Now let’s make some keema! In a pan, add some oil and the chopped onion. Sauté the onion till it turns translucent.

Next, add the ground beef into the pan. Cook the beef-onion mixture for three minutes.

Add all the spices and garlic into the pan and stir while cooking for three minutes.

Now add the water and let it cook until the beef is done, and the water evaporates. Top it off with finely chopped fresh coriander leaves and stir for a minute.

Your keema is ready!

It’s time to put it all together and make some delicious keema parathas! Start by dividing the keema into 12 equal portions. Do the same for the dough by making 12 equal-sized balls from the dough.

Sprinkle some flour on your working surface and roll one dough ball to a thick 4-inch circle using a rolling pin.

Next, place one portion of the keema in the middle of this dough circle. Fold the edges inwards till you have a sealed dough ball stuffed with the keema.

Now roll the ball very gently to a 6-inch circle. Don’t worry if the keema is a little visible – that’s totally normal!

Repeat these steps for the remaining dough balls and keema portions.

Your paratha is now ready to be served! Read along for some serving tips!

Tips to Get the Best Keema Parathas Every Time

Here are some tips to get the most delicious Keema Parathas every single time you try this recipe:

Aloo Paratha: Looking for another Indian stuffed flatbread? This one has a delicious potato mixture stuffed inside it! It’s incredible and so easy to make! Something kids and adults will both love!

Lachcha Paratha: Another incredible Indian flatbread that has crispy layers! Whether you want to have it with some Butter Chicken, or even an omelet, this is a scrumptious recipe!

Kerala Paratha: If you’re looking for a classic paratha recipe – then this is the one for you! It’s lightly fried and has crispy edges and a soft center. 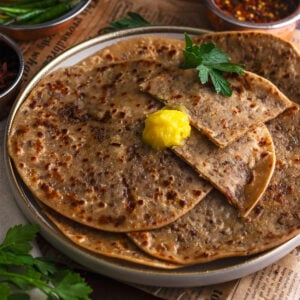